Srila Prabhupada was born in Calcutta in 1896, the day after Janmastami, the appearance anniversary of Lord Krsna. His life history, from his earliest days, to his last, in 1977, is described in the vivid biography “Srila Prabhupada-lilamrta”, by Satsvarupa Dasa Goswami.http://wisdombooksofindia.com/product-category/english/biographies/ 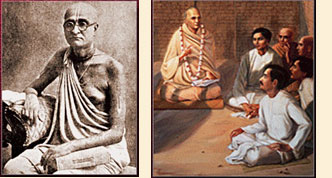 Srila Prabhupada met Srila Bhaktisiddhanta Sarasvati Thakura, his spiritual master, in 1922 in Calcutta. Although this was the first time they had met, Srila Bhaktisiddhanta at once told him, “You are an educated young man. Why don’t you preach the message of Lord Caitanya in English?” This request became the driving force in Srila Prabhupada’s life.

At that time, Srila Prabhupada accepted Srila Bhaktisiddhanta within his heart as his spiritual master, and in 1932 became an initiated disciple. To support his wife and family, he maintained a successful pharmaceutical business.

In 1936, Srila Prabhupada wrote a letter to his spiritual master who at that time was passing his last days on earth. Srila Prabhupada inquired, “How can I serve you?” Srila Bhaktisiddhanta wrote back, “Preach this Krsna consciousness movement in English”. Srila Prabbhupada recognized this as the same instruction he had received at their first meeting and thus knew this to be his life’s mission. He began preparing himself for this great effort.

In 1944, during the Second World War, when paper was scarce and people had little money to spend. Srila Prabhupada began a magazine called Back to Godhead, which is still published today. He would write, edit, oversee the layout, proofread and sell the copies himself.

He retired from his home and family life in 1950 and dedicated the next ten years to studying and preaching. In 1959, he accepted the order of sannyasa, renunciation, and within a few years wrote three volumes of English translation and commentary for the first canto of Srimad-Bhagavatam. He bought the paper, gathered donations to print the books, got the books printed, and sold them himself and through agents in the larger Indian cities.

Srila Prabhupada presents a copy of Srimad-Bhagavatam to India’s Prime Minister in 1964.

Now that he had taken sannyasa and prepared three volumes in Englsih, he felt ready to carry out the heavy order of his spiritual master to bring the holy names of Krsna to every town and village in the world. Srila Prabhupada decided to go to America, convinced that if America took to Krsna consciousness, other countries would follow.

He begged free passage from a pious shipping magnate who had sponsored the printing of his books, and he sailed for America on the Jaladuta, a ship of the Scindia Steamship Company. Travelling for thirty-seven days across the ocean, he suffered two painful heart attacks. Srila Prabhupada arrived in New York city in September, 1965. As he related later on, “I didn’t know whether to turn left or right.”

After he spent a difficult half year living here and there, his followers rented him a small storefront and apartment at 26 Second Avenue in the Lower East Side of Manhattan. It was here that sincere searchers for knowledge had gathered, and gradually they found shelter with Srila Prabhupada, who they called “Swamiji.” 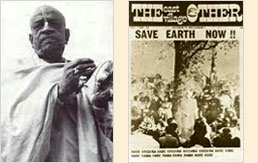 In July 1966, Srila Prabhupada officially incorporated ISKCON, the International Society for Krsna Consciousness, and then he began to strongly develop it as an instrument for spreading the message of Krsna throughout the world. Srila Prabhupada also revived Back to Godhead magazine, which the new devotees distributed on the streets. He regularly chanted and gave lectures before eager groups of people at his storefront. And he distributed prasadam, spiritualized food; at programs he called the Sunday love feast. In early 1967, Srila Prabhupada visited San Francisco to start ISKCON on the West Coast. Many hippies joined and spread the mission throughout their community.

Srila Prabhupada then sent his disciples to other parts of the world to open centers: Montreal, Boston, London, Berlin, and the other cities in North America, India, and Europe. 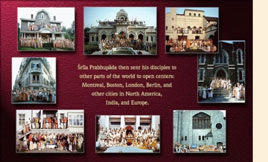 By the time Srila Prabhupada left this world, after preaching for twelve years, he had established 108 centers, written more than sixty volumes of transcendental literature, travelled around the world fourteen times, initiated five thousand disciples, founded the Bhaktivedanta Book Trust – the world’s largest publisher of Vedic literature – and began a scientific academy (The Bhaktivedanta Institute) and the other trusts related to ISKCON.

Srila Prabhupada wrote more than sixty books. He translated the original text from Sanskrit to Bengali, word by word, and gave a complete commentary. In clear, lucid language, he exposed the foolishness of modern materialistic society and presented an alternative in the vast science of spiritual knowledge called Krsna consciousness.

After his first three books, Srila Prabhupada produced all the rest within eleven years. He would write almost daily between 1:30 and 4:30 a.m. He dictated his texts, which his disciples then typed and edited. Srila Prabhupada minimized sleep and spent the early morning hours writing. His days were filled with teaching both his followers and the public, and with guiding his growing society.

Until his last few days on earth, he continued his work of translating and commenting on spiritual texts. He was an extraordinary author, teacher, and saint.

Srila Prabhupada’s Books Reveal the Perfect Knowledge of the Vedas

RE-INCARNATION – AN EXPLANATION BY SRILA PRABHUPADA 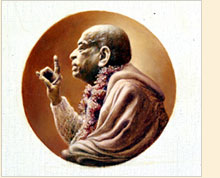 “Human life is simply awarded to a living entity so that he can realize his spiritual identity and his permanent source of happiness.”

Of all his various contributions, Srila Prabhupada considered his books most important. In fact, he would often describe his work of translating and explaining the ancient Vedic texts as his very life and soul. In 1970, Srila Prabhupada founded the Bhaktivedanta Book Trust, now the World’s largest publisher of Vedic literature. Through its work over the last quarter century, millions of people have read at least one of Srila Prabhupada’s books and have felt their lives genuinely enriched. Here is a brief introduction to the spiritual knowledge you will find within those books.

There are many forms of life on this planet. There are immovable forms such as trees and plants, and a vast array of aquatic, insects, birds, beasts, and mammalian forms as well. Our human form is also one among these varied forms of life, yet even a casual observer would have to agree that we human beings are endowed with unique capacities that distinguish us from all other forms of life. What exactly are those unique capacities?

We can begin answering this question with another. What is it that distinguishes a living form from a nonliving form? The answer is consciousness, or awareness. All living forms display this symptom of consciousness to one degree or another. That is why we call them living rather than dead. Even the small microbial germ or the common houseplant show signs of consciousness, whereas our dining table and chairs do not.

But what is it about our consciousness that makes it so different from that of the insect, the bird, the beast, or even the monkey? These creatures eat and we also eat; they sleep and we also sleep; they reproduce and we reproduce; they defend themselves and so do we. That we can perform these functions with greater sophistication may be one indicator that we possess higher consciousness, but it does not fully explain our excellence above all other forms of life.

A more satisfactory explanation is found in our ability to question our existence, reflect upon ourselves, and inquire into our own nature and the nature of God. We can create languages, ponder the meaning of life, and puzzle in wonderment over the night time sky. Such an endowment is not present in any other forms of life.

The Vedas therefore advise that in this human form of life we should be inquisitive to know who we are, what the universe is, what God is, and what the relationship is between ourselves, the universe, and God. We should inquire about the solution to the ultimate problems of life, namely birth, death, old age, and disease. Such questions cannot be asked by the cats and dogs, but they must arise in the heart of a real human being.

Srila Prabhupada’s Books Reveal the Perfect Knowledge of the Vedas 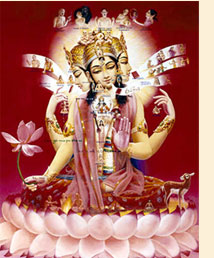 If we can accept the importance of this type of inquiry, our next consideration would naturally be where to find authoritative answers to such questions. Clearly, if perfect knowledge concerning questions of the self, the universe, and God, exists at all, it would have to be of a standard higher than just your opinion or my opinion, or for that matter Freud’s or Einstein’s or anyone else’s opinion.

All of us have imperfect senses and because we are all prone to make mistakes, our relative opinions about matters beyond our experience can supply neither valid nor reliable information.

Founded in 1976 by Bhaktivedanta Swami and Bhaktisvarupa Damodara Swami, it aims to advance the study of the nature and origin of life, utilising Vedic insights into consciousness, the self, and the origin of the universe. The institute’s motto, in the Sanskrit language, is “Athato Brahma jijnasa,” which translates as “One should inquire into the Supreme.” Under the directorship of Bhaktisvarupa Damodara Swami, the BI organised four international conferences and hundreds of panel discussions and talks and published over thirty books. Currently, there are a number of branches of BI, with one of the main branches in Mumbai. Ravi Gomatam is the director of BI in Berkeley and MumbaiThe institute supports a closer examination of existing scientific paradigms in cosmology, evolution, physics, biology, genetics, neurosciences, environmental science and other sciences. The Bhaktivedanta Institute also promotes scientific, and philosophical dialogues among scientists, scholars and theologians of the world.For more info please visit